Thousands of Presente members have signed a petition urging President Obama to use his executive power to put an end to deportations and provide relief for 11 million immigrants.

Yet rumors are circulating that the President is intending to offer relief to only 5 million people.1 But the President can and should do more. In fact, at the very least 8 million could be protected against deportations if his order follows the Senate immigration reform bill that was passed last year.2

To make matters worse, Senate Democrats are urging the President to be “cautious” and are even asking for a delay of his decision until after the November mid-term elections.3 Meanwhile, our communities continue to suffer. With two million people already deported, the number of broken families continues to climb. Every day, countless children, go through the traumatic experience of coming home from school only to find that their parents are missing — picked up by ICE and placed into deportation proceedings.4

But we can put a stop to the suffering. If we keep up the pressure on the President to be bold and act now, we’ll be able to drown out the voices that are calling on him to stall and fall short of stopping deportations for all 11 million immigrants. 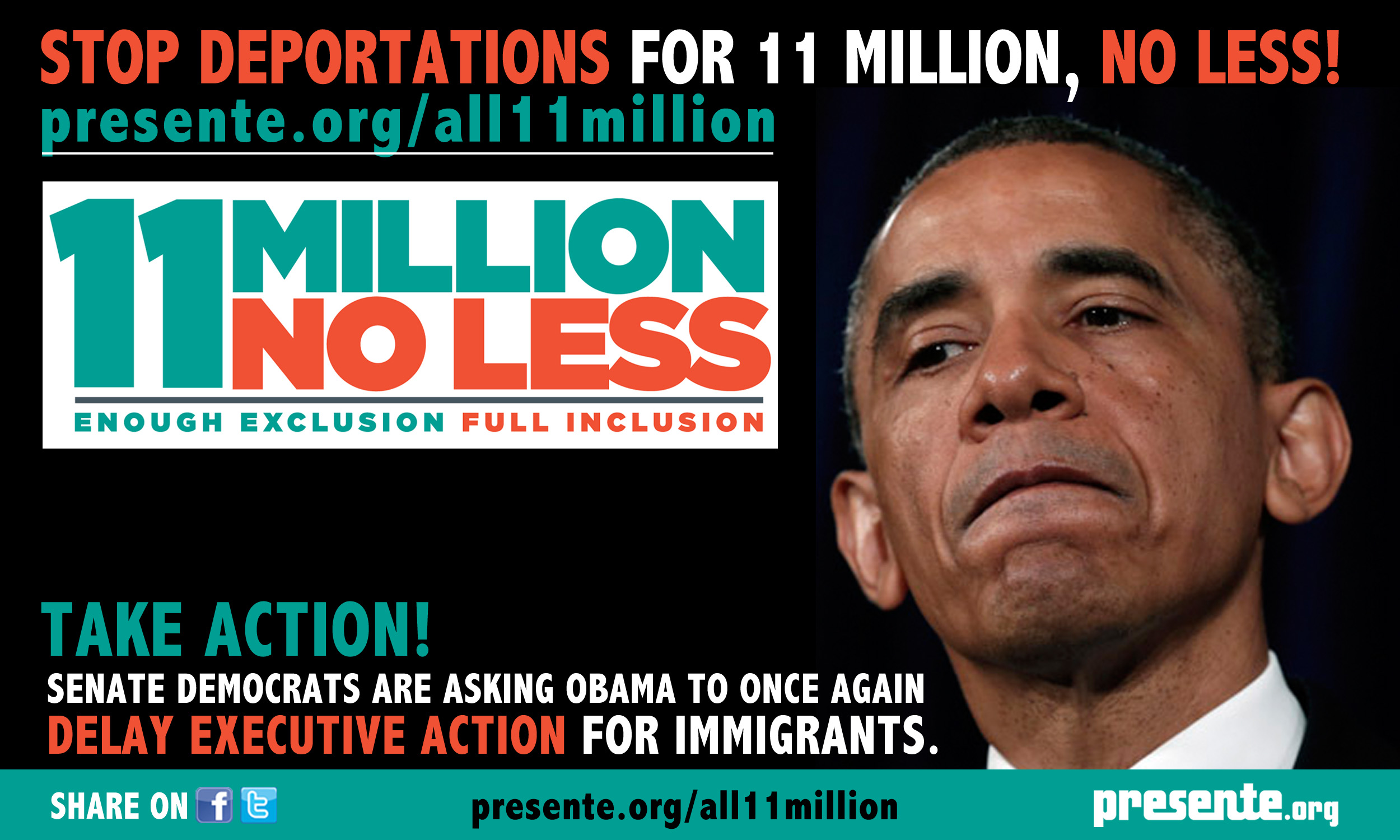 By sharing this image, you’ll not only be amplifying the call on President Obama to act now to stop deportations — you’ll also be sending a message to the political system inside the Beltway that on matters of immigration policy and enforcement, the suffering of our communities is NOT negotiable. Any attempts to delay or dilute relief from deportations will be viewed as a betrayal of Latinos and other immigrant communities.

Frustration is already at an all-time high — 54 percent of Latino voters have told pollsters they would be less likely to vote for Democrats and 57 percent would be less motivated about going to the polls altogether — this November and beyond if there is no progress on the immigration issue.5

With immigration reform officially dead, it’s up to President Obama to act. But he will only do everything he can if we relentlessly tell him to stop deportations for all 11 million and to do it now.

Arturo, Refugio, Mariana, and the rest of the Presente.org Team

4. The Traumatic Effects of Forced Deportation on Families, Psychology Today, May 18, 2013

5. How Democrats Could Lose The Latino Vote, ThinkProgress, August 19, 2014